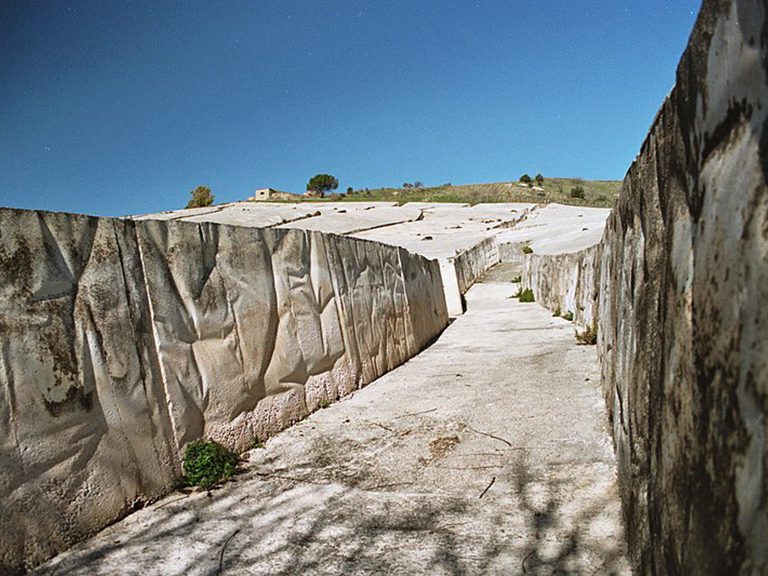 Gibellina is a small town next to Trapani, its city center is located in a limeted area called “New Gibellina” that was born after the belice earthquake that destroyed all the town in 1968. In the “Old” zone, uninhabited, we can find one of the most big land art work in the world: the “Great Cretto” or “Cretto of Gibellina” made by the contemporary artist Alberto Burri.

But, before telling this amazing story of environmental recovery, it’s important to make some concepts clear: what is a “Cretto”?

Burri approches this artistic trend in the 70s with the intention of showing how the artist’s hand is an accessory in comparison to fatalism and process of time that irremediably changes the work, making it unique. In fact, he mixes products such as cellotex, glue, white and colored powders and let time do the rest.

The mixtures, then, will take particular forms, simulating the arid and uncultivated lands. Art becomes a natural process, a projection of what happens every day and that the distracted eye of man doesn’t see.

Gibellina promotes this message of awareness: the rubble compacted and reused in the “Big Cretto” are the metaphor of a shattered nature, destroyed and remained dry but which, however, can become a symbol of rebirth.

The gigantic monument in honor of the “Old Gibellina” is promoted by the mayor Ludovico Corrao with the intention of seeking a post-earthquake redemption that could restore luster and beauty to the territory. Burri went to Sicily on his own, he finances the trip and the project.

Work began in 1984 and lasted until 1989 (although it’s estimated that some completion works ended in 2015 in honor of the centenary of Burri’s birth).

Currently the work appears as a series of fractures on a cemented ground, symbol of the freezing of historical memory and, in particular, of the sad events of the belice earthquake.

The surface of over 80000 square meters includes a lot of cracks between two and three meters wide and the blocks are about one meter sixty high.

The artistic path can be reached along the Strada Statale 119 of Gibellina in the section that intersects the Grotta of Santa Ninfa integral nature reserve, or coming from the Austostrada A29 towards Mazara del Vallo.

In an old church, undamaged by the earthquake, in 2019, the municipal administration, led by Giovanni Sutera, promoted, with the help of the councilor for culture Tanino Bonifacio, the birth of the “Museum of the Great Gretto” in which recall the events and the history of the most big land art work in the world.

This story is very important for the sicilian memory, because it’s a land that has been destroyed a lot of times, but which has always been reborn to its full splendor.

The Cretto, in fact, stands as a symbol of rebirth and, repeating councilor Bonifacio’s words, “it is a place of narration and knowledge where there was life, today there is preservation of memory: first it was the tabernacle of death, today shrine that generates life “.