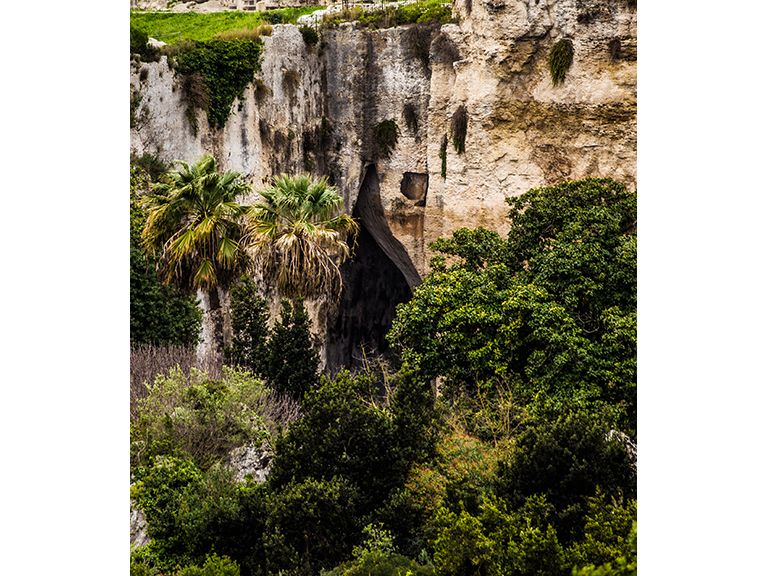 In the south of our beautiful island, the town of Syracuse rises. Its history of domains and hegemonies makes it unique and intriguing: Greeks, Romans, Normans, Arabs and many other peoples left their mark in the territory giving amazing places to visit.

SicilianMagpie will guide you on a journey through the history of a place famous for excellence: the Ear of Dionysus.

Located in an ancient quarry called the Latomia of Paradise, the artificial cave amazes observers for its grandeur, a suggestive glimpse into nature with a particular donkey’s ear shape.

Its limestone walls are over 23 meters high and widen into a curvilinear surface that varies its diameter from 5 to 11 meters. What makes this place unique is the sound amplification capacity produced thanks to the particular shape of the quarry structure.

According to an ancient legend, the birth of the cave was not natural, but wanted by the tyrant Dionisio. In fact, he used it as a place of imprisonment for enemies by exploiting the particular shape and the echo produced there. So he could spy on the remarks and attitudes of the segregated from a remote corner.

The origins of this naturalistic spectacle and of the events narrated are still not certain today. We know, however, that the place and its compelling stories fascinated Caravaggio who, traveling to Syracuse in 1608, baptized the place with its current name.

To date, the Ear of Dionysus is one of the most visited places in Southern Sicily, an unmissable stop for lovers of naturalistic places. Inside, visitors will be fascinated by the grandeur and the sometimes gloomy but extremely suggestive scenery. Very often, inside the cave, we can find people singing to make the visitor hear the peculiarity of the echo that is propagated.