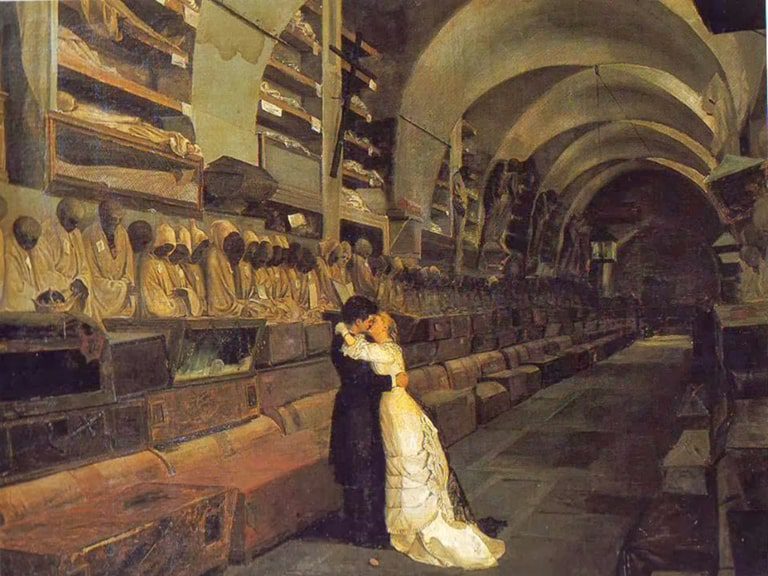 Palermo is the place par excellence of the sun, of the beautiful landscapes, of the most suggestive coasts of Sicily that mix together with the refined artistic taste of the urban center.

Do you know, however, the darker and macabre side? SicilianMagpie shows you the basements of the Capuccini catacombs.

The complex stands in the basement of the church of Santa Maria della Pace, in the heart of the Cuba district.

A steep and dark staircase leads the visitor to a narrow underground cemetery characterized by a mystical and gloomy aura. Inside, more than 8000 mummified corpses are exhibited according to the order of class, sex and social role.

It was probably designed in the 16th century to preserve the bodies of the Capuchin friars. Over the years, however, even the Palermo bourgeoisie was attracted by the charm of making the glory of the dead immortal, but the huge cost of the embalming processes makes the practice a status symbol.

Monks, wealthy merchants, officers in uniform, virgins in wedding dresses, children in party dresses are exposed with disparate poses trying to escape the oblivion and decay of the material.

Mummies have different states of conservation: some perfectly intact seem to evade time, others are now deformed bodies in dusty clothes of past years.

Among these, the best known is the body of little Rosalia Lombardo. Died in 1920 at the age of two due to bad pneumonia. The father decided to fill the pain of absence by making the child’s candid beauty eternal. Alfredo Salafia was very skilled in his work to make the girl eternal, absorbed in a long sleep.

Later the little baby with the pink bow on her head, nicknamed “the sleeping beauty”, is locked up in a nitrogen-saturated case to avoid the progress of the signs of decomposition.

In the 17th century the place became a stage of the Grand Tour as not only a fundamental piece of Palermo’s history, but a place of reflection on the ephemeral permanence of man on earth.

The place inspired not only the considerations of great visitors such as Thomas Mann, but also the inspiration of some famous artists: Calcedonio Reina, for example, created the painting “Love and Death“, currently preserved in Catania in the art gallery of Castello Ursino. The representation of the two lovers inside the Capuchin catacombs echoes the mythological struggle between “Eros and Thanatos” or Love and Death, the power of life in conflict with the unequivocal human destiny.

We recommend visiting the place for curious and thrill-seeking visitors, but also for those who simply want to reflect on life and time.