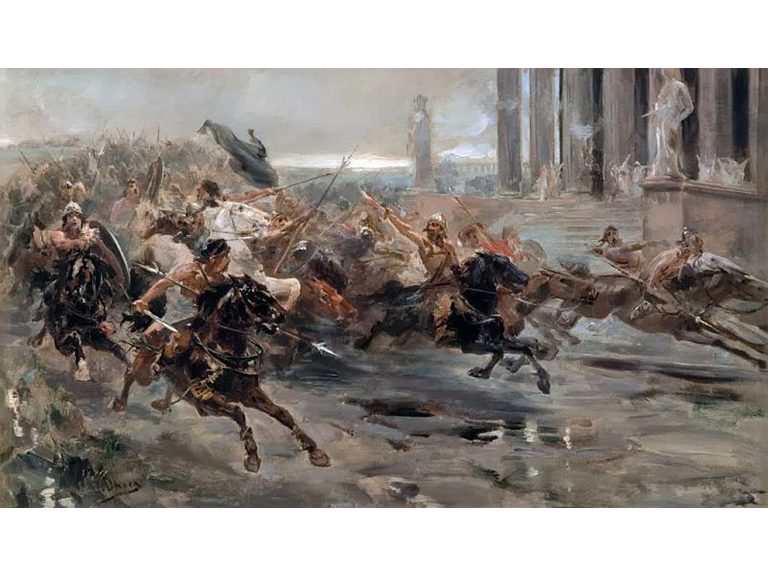 The term “Barbarian” was born from the Greeks who indicated with it all those who did not speak Greek (literally indicated “stammerers”).

The term was later used also by the Romans, however acquiring a different meaning, it referred to all peoples who had a religion other than the Christian one.

The populations that are recognized, at the end of the Roman Empire, as barbarians are those who came from the northern part of Europe, which began to enter into “the empire” and which certainly accelerated its fall. Among the main ones we can mention: Vandals, Huns, Visigoths, Goths, Eruli, Ostrogoths.

Of these peoples those that were interested Sicily are mainly: the Vandals, Eruli and the Ostrogoths.

Genseric was king of the vandals in 428. At first he conquered northern Africa, making Carthage his operational base. In 440 he prepared a fleet with which he landed in Sicily. The Vandals sacked all of Sicily because of the limited commitment to defend it from the Byzantines distracted by the battle with Attila in the Eastern Roman Empire. They were then driven back to Africa, later returning to the island to regain it, around 468.

In 476 the Vandals essentially granted all of Sicily to Odoacre, who was in charge of the Eruli, in exchange for a tribute. Thus Odoacre became king of Italy.

Of the Vandal domination in Sicily we must surely remember the fierce religious persecution against Catholics.

At the end of the fifth century, Odoacre was killed by Theodoric, ruler of the Ostrogoths, whi became the king of Italy.

In the year 500, Theodoric married his sister to Genseric’s great-grandson, Trasamondo, giving Lilibeo as a dowry.

Until 535 the Ostrogoths were the masters of Sicily, in this year the Byzantines began a long campaign to reconquest the island.

The Ostrogoths returned to Sicily in 549 and managed to occupy it again for another two years. Then in 551 the island was totally freed from the presence of barbarians.

Thus ends the history of the Barbarians in Sicily.