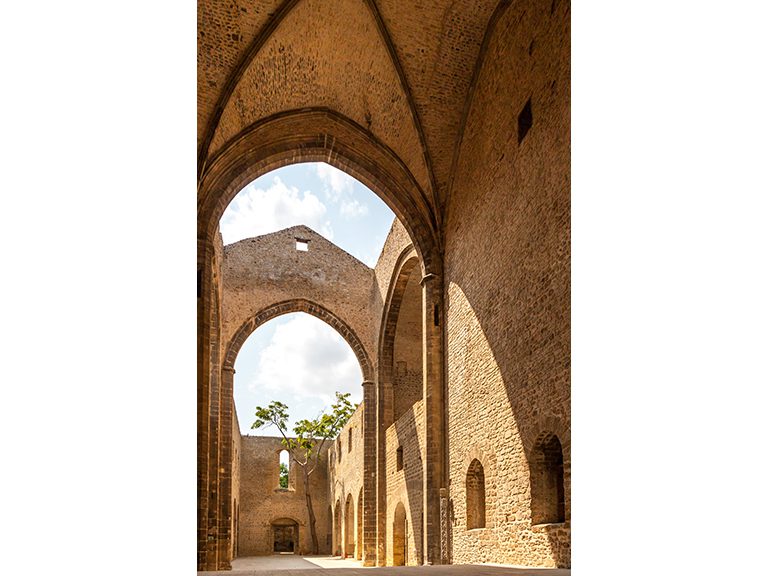 Have you ever seen a church without the roof? Don’t be surprised, you are in “Santa Maria dello Spasimo”, a sanctuary in the old jewish quarter of “Kalsa” in Palermo.

Its history dates back to 1509 when Giacomo Basilicò, devoted to the Virgin, returned from a trip in Jerusalem, he finances the construction of a church dedicated to the pain of Our Lady after the death of Jesus. It is built in a Basilicò’s land next to the gates of the city.

According to the project, the church, the cloister, the bell tower, the dormitory, the cemetery and the vegetable garden had to be ready in 6 years. In reality, due to the ambitious project and the lack of funds, the works aren’t completed and, until today, it is a big unfinished architectural work.

A legend tells that Basilicò commissions to Raffaello Sanzio the famous painting called “Spasm of Sicily”. At the end of the work, it is packed and embarked in a ship that, during the journey, sinks. Inexplicably, however, it is found in the coast of Genova in perfect condition. In Palermo it is exposed until 1661 when, due to the neglect and abandonment of the church, the Viceroy Don Ferdinando D’Ayala decide to donate the painting to the King of Spain. Now it is displayed in the museum of Prado in Madrid. A faithful copy, painted by the sicilian artist Jacopo Vignerio, it can be seen in the chuch of San Francesco D’Assisi all’Immacolata in Catania.

In 1537, a violent Arab invasion, forced the people of Palermo to save themselves and fortify the city. Even the monks, residing in the structure, are forced to find another accommodation, leaving the church at the mercy of events.

Then, the place is reused in different ways: in 1582 it is used for theatrical performances; in 1634, due the plague epidemic, it becomes a lazaret; in the 800’s it is hospice and subsequently a hospital; at the end of the Second World War it is one of the largest deposits of works of art.

In 1997 it becomes the seat of BRASS, an important jazz school.

The visitor, who will have the opportunity to visit the structure, will surely be overwhelmed by the astonishment, not only for the architectural magnificence, but for the possibility of observing the interpenetration of human work and nature. Inside the main nave, in fact, trees stretch their branches towards the upper part of the structure, creating a close connection between the earth and the sky. The vibrations that the place emanates seem to generate a connection between an earthly reality and an ethereal spirituality.