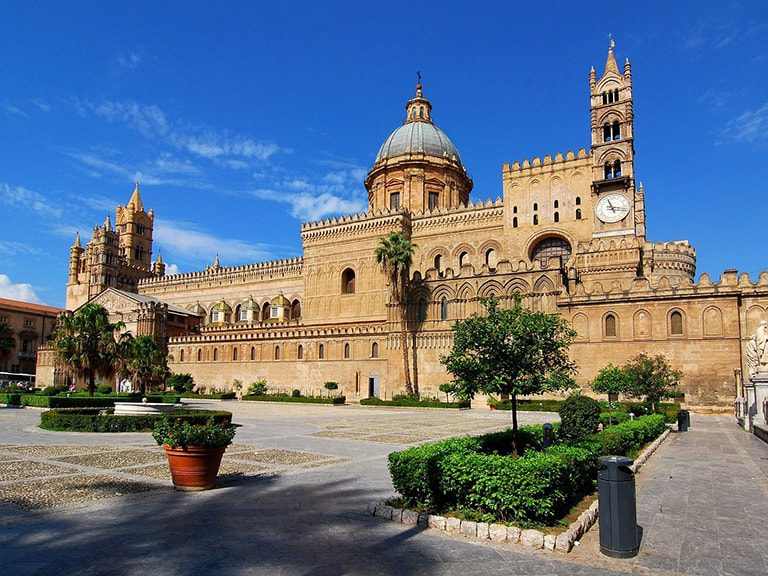 The history of Sicily continues by talking about the Norman domination on the island.

Looking at the aesthetic aspect of us Sicilians, one can often notice the presence of some physiognomic traits that are far from what is the typical aspect that is expected from the population of the island, like medium-low height and dark complexion of the skin, eyes and hair.

In fact, very frequently we can meet tall blond Sicilians with light color eyes … this most likely depends on the fact that in our genetic mix there is also the Norman gene due to the two hundred years ranging from the year 1061 to about 1200 that the Norman stayed on the island.

There are still many buildings built during this domination, especially in Palermo which for a very long time was the capital of the Norman Empire in Sicily.

We are at the beginning of the 11th century, at that time the Norman population was known for banditry and above all for its vocation as mercenaries.

Their link with the Sicilian island began when, around 1040, the Normans were hired by the Byzantines to try to re-take Sicily from the Islamic domination.

During this incursion, the Normans were amazed by the wealth of Sicily and also driven by the weakness of the Islamic empire, settled in the field area at that time, they decided to try to invade the entire island.

The first Norman raid on the island took place by Ruggero Primo d’Altavilla.

After this first approach, Roberto il Guiscardo (Ruggero’s elder brother) together with his younger brother, in 1061, conquered Messina and began to fortify it.
In 1063 there was the battle of Cerami where the Arabs were defeated. Thanks to this victory Ruggero I had secured the dominion of a large part of the island.

Within a few years he also conquered Catania (1071) and Palermo (1072). Roberto il Guiscardo thus became the King of Sicily.
The Norman kingdom then continued with the son of Roberto I, Ruggero II, who, after conquering all of Southern Italy, became King of Sicily in 1130, making Sicily a state that we can define as “modern” as institutions were created such as: the first parliament and the Land Registry.

By making Palermo his capital, Ruggero formed a state in which there were different populations. He also managed to bring to his court, then to his service, many experts in various fields of various nationalities.

Sicily in those years became the largest empire in the Mediterranean.
After Ruggero in Sicily reigned: Simone, Guglielmo I, Guglielmo II and finally Tancredi. This is where the Norman era actually ended.

The marriage between Henry IV, son of the Swabian Frederick Barbarossa, and Costanza D’Altavilla (daughter of Ruggero II) marked the end of the Norman domination and the beginning of the Swabian age of Sicily.

Religion during the Norman period

During this domination the main religion was the Catholic religion. In fact, since the beginning of the Norman age there was a big push towards Catholicism.
Ever since Roger I gave a different weight to people based on religious beliefs, Catholics were favored by laws in their favor over Muslims and people with other religious beliefs.

Roger I pushed towards the repopulation of the island, favoring, in addition of course to the Normans, people from Provence, Britain and the populations of Northern Italy.
During the reign of Roger II there was a period in which Sicily was culturally enriched by the cosmopolitan presence of many ethnic groups.

Given the presence, in addition to the Norman population, of various ethnic groups, the Sicilian dialect was greatly enriched.
We remember first of all the Gallo-Italic which greatly influenced the Sicilian dialect, especially in some areas, and is still perceptible in our language today:

Some examples of this influence are:

(These dialectal terms were taken from the website’s article: http://www.palermoweb.com)

In addition to the genetic and linguistic heritage, the Norman population also left a culinary influence.
Various eating habits that were typical of the Nordic peoples were introduced into our kitchen.
The main influences that are still strongly present in Sicilian cuisine are: the way of cooking meats on the spit and typically Nordic fish such as cod (pisci stocku and baccala ‘).
The introduction of cutlery should also be a legacy of the Nordic peoples.