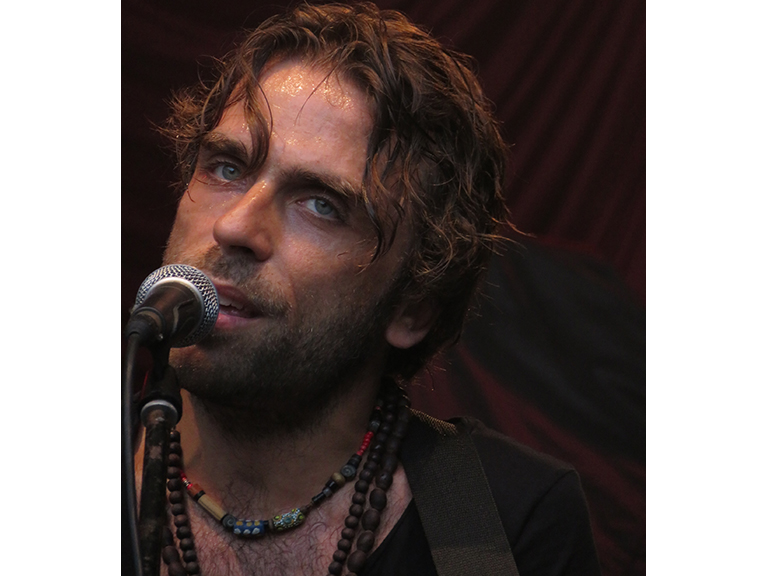 Fabrizio Cammarata is a young songwriter born in Palermo, vibrant as the land from which he comes, Sicily.

Don’t be decieved by its young age: Cammarata has already many studio album and has collaborated with artists like Damien Rice and Tamikrest.

In 2011 the acquaintance of Chavela Vargas and the magnificent tribute to the Mexican singer-songwriter, “Un Mondo Raro” (2017) recorded with his friend Antonio Dimartino, makes him to undertaking a journey, physical and emotional that will change it forever.

In March his latest album Luci was released and we met him during the promotional tour to talk about his music, Sicily and the duende.

Lights is a record which you bond a lot but you need to listen to it again and again to begin to perceive the details, the oriental and Hispanic riffs, the fading loop that connects All is Brighter to Run Run Run, the breaths, the perfumes , the cities, that harmonious circle of Cassiopeia and the reference to the Neapolitan tradition, Timbuktu and the nuances of its symbolisms.

It almost seems that you want to provide a set of geographic coordinates but at the same time leave the maximum freedom to follow them or not.

The journey is the first sensation that returns, but then you realize that there are many other thematic mixtures. If I had to choose one  which would be.

Before answering I want to say something about the journey you are referring to: it is a reference to which I am often associated. Probably, only in my last record (Of Shadows, 2017) this perspective was less evident,  it was an inner journey.

Relatively to Lights I had a feeling of choral rather than travel and does not depend only on a fairly structured band. The meaning of choralism in this case I associated it with resonance, empathy, between me and the listener: looking together for that common ground that all we have. Even during the live shows, my purpose is not to achieve the perfect performance but to try to create a meeting that breack down the barriers, over the language or the geographical origin.

I don’t want my music to relax but not to worry either: I want to be that little flame that keeps you awake, that shakes inside.

This album was made in such a concentrated way that it managed to coexist together with everything that surrounded it: thoughts, sounds, places, languages, countries.

In Of Shadow you defined it as those places of the soul in which we prefer not to go, places where weak spots, fears, portions of immoral heart lurk.

In “Run Run Run” you express a comparable concept (it’s more difficult to remain still and see what our soul has to tell us), as if you wanted to continue the dialogue started with Of Shadow: the comfort of moving quickly to have an illusion of change, avoiding to go through outlying streets.

Exactly, it’s like when you think that going to the hairdresser can change you or move from one place to another could improve your quality of life.

It’s not so, it is not at that moment that the change takes place; he can reshuffle the cards but if everything remains the same, if we stay the same, we will always be still, anywhere in the world.

Some popular traditions walk on opposite dichotomies, mixing, passing time, sacred and profane in an almost natural way.

You can think of gospels and spirituals, the Catanese patron saint’s feast  of Sant’Agata, Cohen’s Hallelujah or the traditional music initially imported with the idea of ​​Christianizing the people but which then became different.

This reflection that came to my mind as I listened to Rosary’s text: a devotional and contemplative symbol, a feeling of pure love and the rigor of a mathematical mind.

I believe I’m a union between these two worlds: the first, more rational, needs to understand, to ask questions and find the answers and a second world that instead asks for nothing but being amazed, without seeking any explanation.

I love the night sky because I am passionate about the life cycle of a star, in the astrophysical meaning, but at the same time I love the fascination of these elements in a remote time, in which there was no explanation: it was enough to combine points to give life to figures mythological, Cassiopea, Cepheus, Perseus, Andromeda.

This is one of those rare cases in which I can see the two extremes in co-presence. My religion is very similar to this way of thinking and it is thanks to this that I can get that kind of triangulation.

In this sense, Rosary is not the only example inside the disc: also My Guitar at 4 a.m. puts in place that kind of mechanism, I pretend to talk to my guitar because it intercedes between me and an interlocutor that I can’t reach at that moment.

The theory of six degrees of separation (developed in various contexts from the ’30s onwards), which became famous thanks to the American psychologist Stalney Milgram, shows how two apparently antipodes can be connected in six degrees.

I thought of this when I heard you say that there are more connections than you might think between Chavela Vargas and Robert Jhonson.

I believe that what connect Chavela Vargas to Robert Jhonson is the ability to make universal a message that can be separated from language and sound but is something totally cryptic: Andalusians call it “the duende”.

It is a small demon that creeps into the singer’s communication without his knowledge. This being he has the ability to increase pathos, intensity and the ability to penetrate all the other souls that are with him. I think it’s exactly the duende that connects artists so far apart.

When, during my live, I sing La Llorona (a piece of Mexican tradition) I feel exactly like that, abandoned by myself, I stop existing, even for a second and I don’t know what my sex or my origin is anymore geographical.

I know you like Tinariwen, the Malian collective that spreads music as a means of expression of the Tuareg culture. For security reasons, in 2016 they were forced to record their latest album, Elwan, in Taralgate, a tiny city where caravans stop one last time before reaching Timbuktu.

This is a tiny link between you and them. Your Timbuktu has a completely different symbolism from that and yet it represents something urgent that drives both in that direction.

How do you experience freedom of movement or cons, geographical constraints?

It is true that for me Timbutktu is a pretext to express something else but it is not a casual reference: my story with this city is real and it is the story of a missed meeting. In 2013, I was invited to play in the “Au Désert Festival” and it was a huge recognition for me.

Having the opportunity to play on the same stage as Robert Plant, Santana and the Tinariwen had performed it’s not every day. That year, due to the violent clashes caused by jihadists, some of which were Tuareg (exactly like the Tinariwen), the festival was first moved from Timbuktu to Burkina Faso and later canceled. For me, that place remains a sort of unfinished, something that I approached dizzily but never physically reached.

I have transformed this place into an ideal destination, a middle ground where dreams and reality meet. The track of Lights, Timbuktu is a letter that attempts to restore contact between two places that seem to be completely disconnected, the here and the Timbuktu

Often, you are asked to choose to sing in an idiom that is not your native language but music is in itself a language not a speech. Some time ago I read an interview with Ferruccio Quercetti in which he described perfectly the contradiction between not accepting the choice of singing in a different tongue as normal and not being surprised instead when listening to a blues song or anything else that originates from a musical tradition different from ours.

Yet, however, it would take little to associate your way of composing and writing to freedom that only a land detached from everything, bathed by the sea and open to all kinds of stimulation and contamination.

Do you ever want to curb this lack of boundaries, in your music and in your way of life?

The same identical question should be asked of all those who hold an electric guitar or play drums.

We focus on a detail like the language that actually is much more obvious than other.

Probably this character of immediacy is at the same time cross and delight of the voice, it affects everyone instantly on first hearing.

Our ear is more sensitive to the voice than to other details.

I keep saying that I don’t remember what helped me develop this sort of imprinting.

Writing and singing in a language that is not my mother tongue is a very natural process for me that does not destroy my identity as a Sicilian or a Palermo citizen.

In this regard, there is a very complex reflection on the Sicilian identity, in particular Palermo, which does not often emerge.

What I am about to say could be interpreted negatively but I believe that our local identity is a bit forced when extremely marked pride is manifested.

Ours is a story of continuous betrayals and it is almost natural for me to reflect on the fact that my heart does not light up with traditional Sicilian and Palermo music. I know her, I get excited with many things like that, love Rosa Balistreri but my heart doesn’t speak that language, because even my grandmother didn’t speak it. Likewise, the Italian does not give me a sense of belonging one hundred percent. I love it as a language, I love reading poems in Italian, they excite me much more than in English. I believe that we, the Sicilians, do not have a real mother.

The myth of the llorona is a connecting criterion between Sicily and Mexico: this mother who kills her children, annihilating her identity and leaving her liquid, annihilated by pain. It is all about transforming this lack, this sense of lost, into an opportunity: having a house a little more empty in which you can put everything you want and build a new identity.