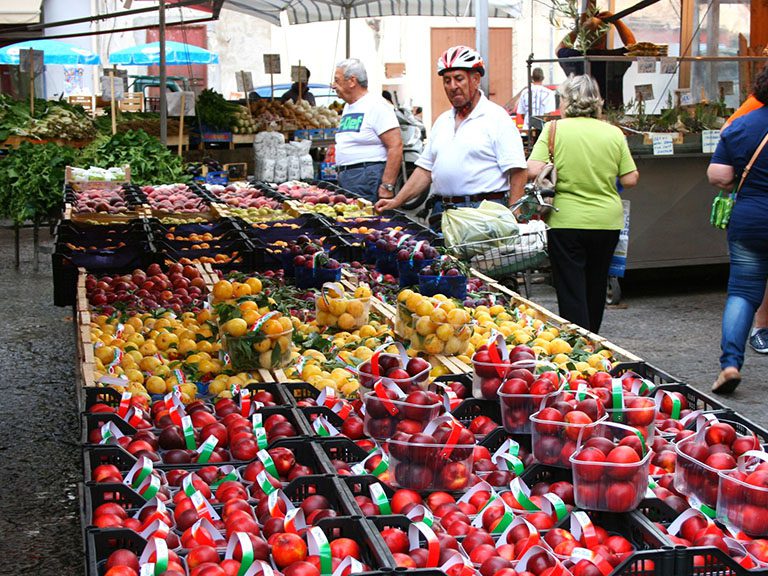 Since ancient times, Palermo has based its economy on trade and on the exploitation of territorial resources. The markets of Palermo, in fact, can be considered the true heart of the city, a dip in the history and tradition of the Sicilian chief town.

SicilianMagpie will guide you on this journey, through voices, smells and tastes.

It is the most famous of the Palermo markets. Not surprisingly, due to its ancient and constant activity, the popular voices state that “i balati ra Vucciria ‘un s’asciucanu mai” (from the dialect “the street of Vucciria are always wet”)
Its name has its roots in the Palermo dialect: “vucciria“, in fact, means “screams”.

It is one of the closest shopping centers to the port and, since the 12th century, it has been a place of interest for Pisan, Genoese and Venetian mercenaries. The concentration of small shops of artisans, stalls, butchers and fish stalls have attracted visitors since very ancient times.

“Cucuzzeddi, pisci friscu, stigghiole, frutta di tutti i tipi” (which means “zucchini, fresh fish, goat entrails, all kinds of fruitare”) still advertised loudly by local merchants. The gastronomic development has also allowed the opening of many restaurants who allow tourists to fully immerse themselves in the culture of the place.
Vucciria, however, changes its face at sunset. In the evening, in fact, bars and pubs, becoming a reference point for the Palermo nightlife.

It is the oldest of the Palermo markets. It is located between the ramparts of Corso Tukory and Via Vittorio Emanuele and Via Maqueda.

His “buciari“, or merchants, are the best known for the sale of typical fruit deriving from the neighboring countryside of Palermo and for the traditional foods cooked inside their own shops or stalls.

In antiquity it was the favorite place for Arab traders. In fact, it was possible to find spices and precious silks from the Middle Eastern countries.

But Ballarò is not just culinary tradition. In recent years it has become an important place for contemporary art. Thanks to the “Cartoline da Ballarò” project, the market area has become one of the most famous centers of Sicilian street art. Artists like Igor Scalisi Palminteri, Andrea Buglisi, Alessandro Bazan, Angelo Crazyone, Fulvio di Piazza have embellished the area of Ballarò/Albergheria with sensational murals that make this stage unique and important in the touristic tours.

From Porta Carini to Via Beati Paoli we can find one of the most popular markets in Palermo: the Capo. It has Muslim origin and, later, it becomes one of the most important market for the Augustinian monks who resided in the homonymous church in the neighborhood. The long street full of stalls and small shops, making this place folk and useful for the purchase of traditional Palermo products.

Also one of the typical Palermo markets. Its numerous stalls are located between Piazza Sturzo and Piazza Ucciardone.
It is the only market that remains open until the evening hours, allowing visitors to take advantage of typical products whenever they want. Because of this peculiarity, it is the point of reference for many young people who meet here for dinner and organize their evenings.

Born in the post-war period, the flea market becomes the flagship and the direct testimony of Palermo’s history.
In Piazza del Papireto, the small and permanent shops in sheet metal with their very special ancient memorabilia making this place a fundamental stop for tourists in Palermo.
In it, also, we can find manufacturing works from the Sixties and Seventies and small stalls with jewels and other handmade items.