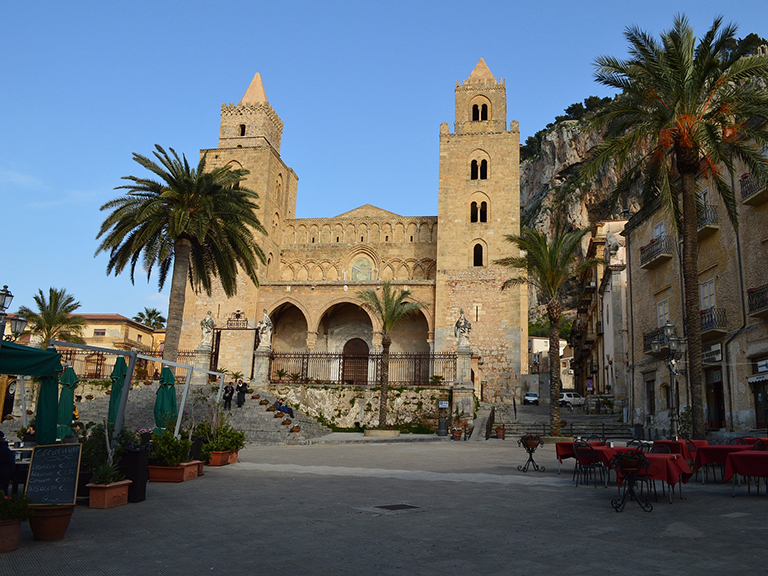 Nested like a rare gem between the Tyrrhenian Sea and the massifs of the Madonie Park, Cefalù is a small medieval town in the province of Palermo (about 70 km away).
In itself it contains the history, art and Sicilian landscape beauty: a seaside resort considered for its suggestive beaches (such as La Caldura and Salinelle) and one of the most beautiful villages in Italy.

It was inhabited since prehistoric times, in the 4th century, it became, a small Hellenistic port. In this period its name was born: Κεφαλοίδιον (Kefaloidion), from the Greek “kefa” or “kefalé”, that means “head”, due to its strategic position on top of the fortress.
It was conquered by the Greek, Syracusan, Roman people, it reached its maximum beauty in the Byzantine era. In this period the urban layout was modified, moving the city centre from the flat land to the fortress. It has been unchanged over the centuries, the cobblestones of the Cefalù’s fortress cover medieval streets, and lead us to the most interesting cultural sites; one of the most important is, without doubt, the Cathedral Basilica of the Transfiguration.

There is a legend that tells us that Ruggero II arrived in the port after a terrible storm and he ordered to build a cathedral in honor to the Holy Savior. Works began in 1131 and in 1145 Ruggero II commissioned mosaics and porphyry sarcophagi destined for his own burial and that of his wife. The architecture is complex: Norman influences (such as the main towers) mix with Arabian and fifteenth-century structures. Inside it is divided into three naves crossed by an imposing transept. The mosaic decoration which is considered the flagship: a Christ Pantocrator dominates the apse, the index and the middle fingers united indicate its human and divine nature, the other joined fingers symbolize the Trinity. The remaining representations are devoted to the figure of the Virgin Mary accompanied by the archangels and other biblical characters. Since 2015, the cathedral has become part of the UNESCO World Heritage.

Cefalù is unique and can’t be missed as a fundamental destination in western Sicily. The famous writer Leonardo Sciascia said: “there is no tourist that traveling through Sicily – even if has little interest in arts- between Palermo and Messina- that doesn’t feel obliged and willing to stop in Cefalù […]”.