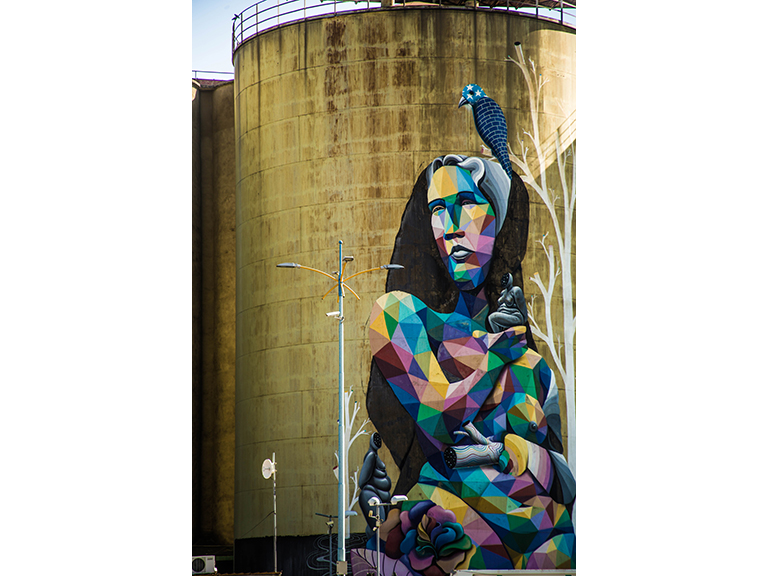 Catania is a small city at the foot of the Etna; renowned for its history, from Greek origins up to the present day, it’s one of the most important artistic centers of the Mediterranean sea.

The root of its beauty is undefined: like a phoenix it has been reborn several times from the ashes and rubble of the numerous volcanic eruptions. Today it appears to our eyes as a melànge of tradition and innovation that never ceases to change.

It’s in this atmosphere of scents and traditions that the taste of a new artistic trend is spreading: street art.

Sicilian Magpie wants to take you on a sensory journey through the places of urban innovation:

The small neighborhood was born after the volcanic eruption of 1693 that destroyed much of the town of Catania. Its limits touch the areas of the historic center: from Piazza Stesicoro to the train station.

Originally it was an important multi-purpose center studded with houses and small artisan shops.

In the 1950s, building speculation made it a place on the margins of society. It is said that, in this period, it became the seat of the red-light districts of Catania. This reality is not very far from us, only in last years the Municipality of Catania has been activated in order to re-evaluate this area.

So, through the hands of young artists it became an open-air museum of contemporary art.

Walking through the small streets,center of Catania nightlife, you can see the murals that reproduce, in an allegorical key, the history and myths of the sicilian tradition. Piazza delle Belle is the center of this new artistic agglomeration: the lights of the street lamps guide the observer like in a outdoor gallery.

As a maritime city par excellence, the port of Catania is famous for tourism and commerce, and lately it’s in the news for the national diatribe about landings and immigration.

On June 21st 2015 the Municipality of Catania promotes an initiative: the Art Festival, to improving the crumbling structures of the place that degraded the suggestive landscape.

The old silos of the port were decorated with fascinating graffiti by great international artists (Okuda and Rosh333, Microbo, Bo130, Danilo Bucchi and VladyArt, the duo Intersni Kazki) that follow the myths of tradition: Colapesce, Bellini’s beautiful Muse, the Ulysses’s escape from Polyphemus, the events of Scylla and Charybdis and the Minotaur’s representation.

It’s in our small italian metropolitan city that the world’s largest mural is found: a man with his eyes lost to the Mediterranean Sea decorates eight silos in the center of the port. The work of the portuguese Alexandre Farto, aka “VHILS“, is considered one of the most important works of territory revaluation that gives prestige and luster to the city.

Since the 1970s, a long and gray expanse of reinforced concrete has spread to the Catania suburbs. Librino with its palaces and public housing is counted for its bad reputation. A degraded and delinquent area par excellence, it finds a glimmer of hope only in recent decades thanks to Antonio Presti’s work, a renowned sicilian patron already known for the construction of the “Fiumara d’Arte” in Tusa (ME).

In this district the largest terracotta street art work depicting the theme of the “Great Mother” stands out.

The artists have worked in collaboration with the children of the neighboring schools, creating a work that extends for more than 500 meters.

The goal of this magnificent initiative is to make people aware, through art, of the place magnificence.

Largo Paisello was considered for centuries one of the most prestigious places in Catania. Between Via Sant’Euplio and the famous Villa Bellini, we can meet the imposing and elegant fountain designed by Dino Caruso. In recent years, however, neglect and disinterest made this building the meeting place for sicilian writers and skaters. So the great widening became stage and protagonist of the young street artists creative inspiration.

Next to the seafront, the small beach of San Giovanni Li Cuti is a truly impressive naturalistic landscape. It’s a popular place for tourists and citizens on hot summer days, it remains an evergreen for the romantic view towards the sea.

Here we can found the work of the young streetartist Salvo Ligama, who holds a degree in Graphics from the Academy of Fine Arts. The mural, “Poseidon“, represents the god of the sea in all its manhood and beauty. The reference to mythology is clear: Poseidon, god of the sea and earthquakes, seems to have a connection with the naturalistic elements and the history of our land.

The work, 32 meters long and 2.20 meters high, was inaugurated on June 2 by the mayor Salvo Pogliese, in honor of the LungomareFest.