SicilianMagpie’s choice on what to see in Catania.
Catania is the most densely populated municipality on the island, representing the economic and commercial center of Sicily.
Its origins should date back to the eighth century BC, in fact Catania retains a large amount of history and you can see most of it. In the main monuments, the Baroque style is the one that stands out and most reflects the architectural style of the province.
The very lively lifestyle of this city has meant that Catania is also well known for its nightlife.

Catania, like all Sicilian provinces, is a city rich in history. We can trace its history back to the Greek colonies but it is likely that it was already inhabited in previous periods, in fact there are archaeological finds in some areas (from the Benedictine monastery to the Greek theater) which prove an older history.
The traces of this long history are present and visible throughout the city.

Certainly a must for anyone who wants to visit Catania is Piazza Duomo, here you can find the elephant, symbol of the city. The elephant (“Liotru” for the Catanesi) was placed as a monumental fountain by Vaccarini during the reconstruction of Catania after the earthquake of 1693. The elephant, entirely made of lava stone, was already existing, for many the statue was built during the Carthage domination, but it was restored and embellished. Above the statue an obelisk was placed which is thought to have been brought to Catania by Syene.
Still inside the square we find the Cathedral of Catania. The church was built after the 1693 earthquake on the ruins of the old Norman building. The style of the monument is baroque.
With the Duomo placed in front on our left we find the Palazzo degli Elefanti and on the right Palazzo dei Chierici.
The Palazzo degli Elefanti is the seat of the Mayor, the City Council and the Municipal Council meet.
Inside you can admire the ancient carriages of the Senate. The style of the building is in line with the baroque of the rest of the square.
Palazzo dei Chierici was rebuilt after the 1693 earthquake, it is located above the ancient seat of the first seminary of the clergy. Today it houses the municipal administration offices.

Among the things to see in Catania we must certainly enter via Etnea.
Via Etnea is the road that crosses the whole city, its birth derived from the reconstruction of Catania after the earthquake of 1693 and the choice to trace, as the main artery of the city, the road that, starting from Piazza Duomo, went in the direction to the Etna vulcano.
Along this street we find many of the major churches and buildings of high artistic value in the city of Catania:
The Palace of the Elephants
The Palace of the University
The Basilica of the Collegiate
The San Giuliano Palace
The Church of the Minorites
The Church of San Biagio
The Church of the Santissimo Sacramento al Borgo
The Church of Sant’Agata al Borgo
The Gioeni Palace
The Palazzo del Toscano
The Palazzo San Demetrio ai Quattro Canti
The Tezzano Palace
We must not forget that in Via Etnea we also find the entrance to the Villa Bellini. The oldest part of the “Villa” is an 18th century garden, once owned by Prince Ignazio Paternò Castello di Biscari. Inside we can find “The Avenue of Illustrious Men”, an avenue with busts of famous people.

Another artery in the city that is certainly part of what to see in Catania is Via Plebiscito. This street has very ancient origins. During the Middle Ages the city of Catania was closed inside a city wall, Via Plebiscito was the street that followed the walls externally. This street is a highly representative part of the essence of Catania itself.
Along the way we can find places that offer one of the most consumed and characteristic foods in Catania, horse meat. Traditional meat was shown and cooked (cooked on the grill) directly on the street. Today this is no longer the case, for the respect of hygiene rules, the meat is cooked inside the premises, which are many along the way. It must also be said that according to the day in the part of via Plebiscito closest to San Cristoforo (one of the oldest neighborhoods in Catania, famous for the stories of mafia and crime), you can still find someone who shows and cooks the meat directly on the road, although in a few years this frequency has decreased sharply, thanks to the controls of the police. I admit that the habit of consuming horse meat, chosen and cooked before your eyes, has been part of the city’s culture within all its social strata.

Another destination that you can’t miss is the Pescheria. The fish market of Catania is the historical fish market of the city. Present since 19th century it has become very popular with tourists. It is located behind Piazza Duomo, passing under the Carlo V’s door.
The reasons for the popularity of this place as a tourist destination lies precisely in the fact that this place is the nucleus of Catanese folklore.
The fish market is open in the morning. The first activities are present from early morning to reach its peak around 11 am. Here we will find a chaos of people who bargain on fish, sellers scream to draw attention to the quality and freshness of their product. Frequented by the people of Catania, it can be considered a must for those who want to immerse themselves in the life and “color” of the city.

Staying in the mood of the fish market, a walk inside the Fair cannot be overlooked, for the people of Catania “Fera ‘or Luni”.

Fiera di Catania is the historical market of the city, it is located in Piazza Carlo Alberto and covers a vast area that in the mornings is filled with stalls selling … almost everything

:
clothes, kitchen items, fabrics, glasses, shoes, meat, fish, cheese, vegetables, underwear, spices, bags, belts, CDs, work tools, dried fruit, seedlings, furnishings … and I’m ready to bet that , if you take a ride in this market, you will surely find at least one more thing that I forgot to mention.
The Catania Fair, like the fish market, is a place full of folklore. There will be screams and self-produced songs (

) that will invite visitors to buy or try a specific product. I highly recommend you to drop by if you are in Catania, you will have a unique experience.

For those who are in Catania and want to visit it for good, a thought about Etna is a must.
It is the highest active volcano on the European continent. With its constant volcanic activity it has greatly influenced the aesthetic conformation of the island and the mentality of the Sicilians.
Etna, full of easily practicable paths and guided tours, is certainly one of the obligatory stops in Sicily.
Obviously to take a tour to the volcano you have to get organized and find a way to reach it. If you want some advice on how to organize yourself, do not hesitate to contact us, we will try to help you, according to your needs, to find the best solution.

One of the recommended destinations among the things to see in Catania is certainly Aci Trezza, this seaside village is located in the province of Catania and is about 10 km from the city center.
Aci Trezza is a fraction of Aci Castello. This village, originally of fishermen, is today a major tourist destination, not only for the wonderful landscapes and its rocks, but also thanks to the novels of the writer Verga set precisely in Aci Trezza.
In addition to the aforementioned novels, this village also boasts a mythological tradition linked to the Odyssey. In the ninth canto of this opera, Ulysses collides with the cyclops Polyphemus, a giant with one eye, who had kidnapped him and his men to eat them.
After making him drunk, Ulysses blinds him with a trunk and manages to escape. During the escape of Ulysses, Polyphemus furious and blind begins to throw giant rocks to take revenge.
According to mythology, the huge rocks thrown by the Cyclops formed the little islands that are located in front of Aci Trezza, called precisely: the island of the Cyclops.
The seaside of Aci Trezza is precious, certainly one of the most recommended places for tourists who come to the island.

Another town in the province of Catania that we recommend visiting is definitely Caltagirone. This town certainly has characteristics that make it unique.
The town of Caltagirone is located 68 km from the city of Catania and only 200 km from the city of Palermo. Its historic center is considered a UNESCO World Heritage Site
The main feature of Caltagirone is ceramic. Inside the village there are really many shops selling typical Sicilian ceramics, like nowhere else in Sicily, making Caltagirone “the capital of ceramics” on the island.
If you can visit this town we advise you not to miss the municipal villa and above all the very famous Stairway of Santa Maria del Monte.

Another municipality in the province of Catania that I would recommend visiting is Bronte.
Bronte is located 50 km from the city of Catania and is one of the best known Sicilian municipalities. The main cause of this fame is not, how you could expect, the aesthetics or art present, but rather its typical product that makes it unique: pistachio.
This type of dried fruit is typical of Sicily and its culinary tradition. But it is the bronte pistachio that is the most famous and probably the best in the world.
So for anyone who wants to visit Catania our advice, especially for the sweet tooth, is to go to Bronte and taste any or all of the pistachio-based specialties you will find. I don’t want to go into the details of the various products because I think there is no need, this is because whatever you taste here will be impossible to find in the rest of the world. So if you ever pass by Bronte … Buon Appetito 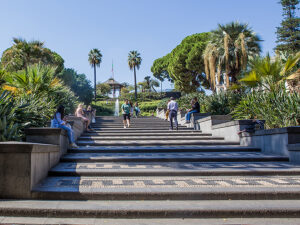 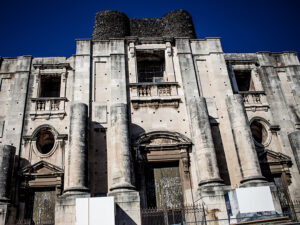 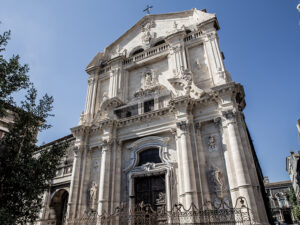 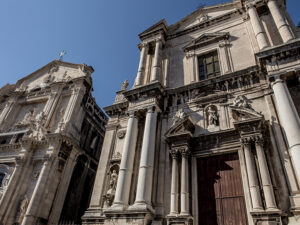 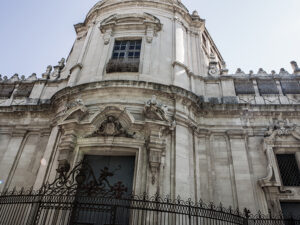 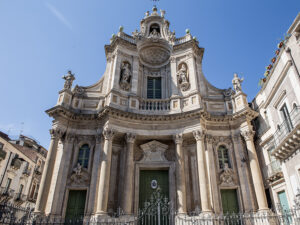