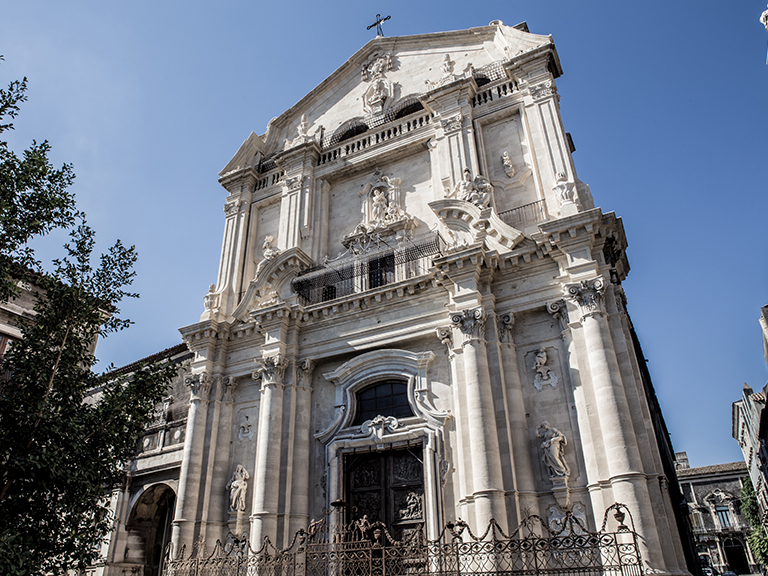 “Melior de cinere surgo” is the slogan of Catania that, in its history was destroyed a lot of times by earthquakes. After 1963, we can find this motto in “Porta Garibaldi”. The city, reduced to ashes, reborn more beautiful and splendid: it became baroque.

One of the most important Catania’s street is Via dei Crociferi, bourgeois and cultural center very famous for its baroque structures placed in less than 350 meters.

Passing the arch of San Benedetto, that is the point of union between the big ebbey of San Benedetto and the monastery of the benedettine nuns, we can immerse ourself in a rich, picturesque and romantic atmosphere.

Immediately after is the church of San Benedetto that catches the attention for its amazing “stairway of angels” made of marble with representations of angels and an impressive wrought iron gate. Inside there is only one navat decorated with frescoes that show San Benedetto’s story made by Sebastiano Lo Monaco, Giovanni Tuccari e Matteo Desiderato. It became one of the most folkloric place in Catania because, every year, cloistered nuns go out to dedicate a sweet song to Sant’Agata, patron saint of the city.

After we can find San Francesco Borgia’s church with two imposing staircases. The facade was designed by Angelo Italia, made of white marble with two orders of columns that give rigor and majesty. Inside, three large naves are decorated with 18th century frescoes and statues dedicated to San Ignazio and San Francesco Saverio. The beautiful dome, which tells the story of the Jesuit order, was made by the master Olivio Sozzi. History tells that in 1801 in this church the musician Vincenzo Bellini was baptized.

On the left side of our path, we can see the Jesuit College, recognized as a UNESCO heritage site in 2002. Its construction, post-earthquake, was not short, it took almost forty years of work that, however, gave rise to one of the most beautiful buildings of the Company of Jesus in Sicily. The building has four paved courtyards of black and white pebbles, respecting the style of Francesco Borromini. Famous names such as Francesco Battaglia and Giovan Battista Marino participate in the construction of the building. Over the centuries it has been used as the seat of the “Collegio delle Arti“, the Hospice of Charity and since 1968 until 2009 it has housed the Institute of Art.

In front of this building, we find the most beautiful example of Catania baroque: San Giuliano’s church, rebuilt between 1739 and 1751 by Giovanni Battista Vaccarini. The convex facade is very special: with its curved lines and its lights and shadows play, give uniqueness and royalty to the building. The octagonal interior has four altars decorated with works by Olivio Sozzi and Pietro Abadessa. The high altar, made of polychrome marble, is decorated with gilded bronzes made by Giovan Battista Marino. At the center there is a refined little log made by Nicolò Mignemi, with two majestic statues representing Faith and Charity. In the apsidal basin we find the amazing fresco of God by Giuseppe Rapisardi, great exponent of the nineteenth-century in Catania.

Crossing via Antonino di Sangiuliano, called by the people of Catania “acchianata di Sangiuliano“, we will find the beautiful church of San Camillo and Villa Cerami, ancient residence of the prestigious Rosso di Cerami family from which it takes its name and currently the seat of the University of Law.

In recent years, beyond this amazing structures, we can find a lot of restaurants and pubs along the way, which offer a complete cultural and sensorial excursus that embraces art and culinary tradition.