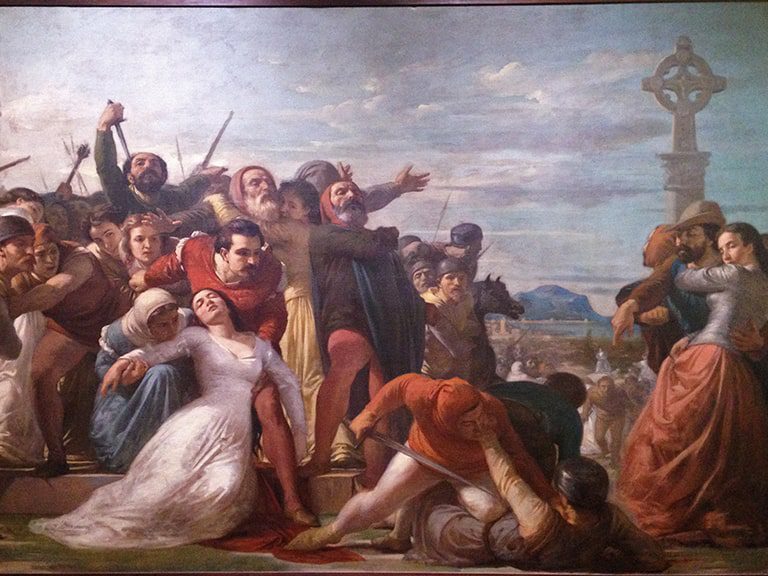 The domination of the Anjou in Sicily was very short, perhaps the shortest in the history of the island.

The beginning of this story took place when the pope, Urban IV, who considered Sicily heritage of the church, decided to give the crown to Charles I of Anjou. This defeated and killed Manfredi, son of Frederick II, in Benevento, inaugurating, in fact, the dominion of the Anjou on the island.

After a few years Corradino, grandson of Frederick II and legitimate heir of Sicily, tried to reconquer the island, but was defeated and beheaded in the Battle of Tagliacozzo.

The dominion of the French in Sicily, however, lasted very little due to the Sicilian Vespers.

The situation in Sicily, under French domination, became alarming almost immediately, especially due to the large tax burden applied by the new Dominator and the various abuses and violence.

It is said that the Angevin ruler hated the Sicilians because they were faithful to the Swabians.

Perhaps the opposite could be true, that is, the Sicilians remember the old kings precisely because the French behaved very badly towards them.

The situation worsened until, in 1282, the revolutionary movements called Sicilian Vespers began.

The revolt began in Palermo on Angel Monday during the hour of vespers.

It is said that the triggering event that marked the beginning took place in the churchyard of the Santo Spirito church, when a French soldier put his hands on a noblewoman accompanied by her husband, groping her with the excuse of searching her, it was at that point that the consort stole the soldier’s sword and killed him, starting the revolution.

In the course of the evening and night, a real French hunt took place. Those of them who did not die managed to escape on the ships.

Legend says that the Sicilians used chickpeas to find the French who tried to mix with the inhabitants of the island, asking them how to pronounce the name of the chickpeas in dialect.

Carlo tried in vain to react but all attempts were in vain.

The Sicilians tried to convince the pope to be able to govern themselves, but given the pope reluctance, they turned to the Aragonese king Peter III, husband of Constance, nephew of Frederick II of Swabia, offering him the crown of the island .

Peter III gladly accepted the request and landed on the island definitively driving out the French.

Carlo retried an assault on the island that failed even before arriving in Sicily, his fleet was defeated off the coast of Malta by Admiral Ruggiero di Lauria.