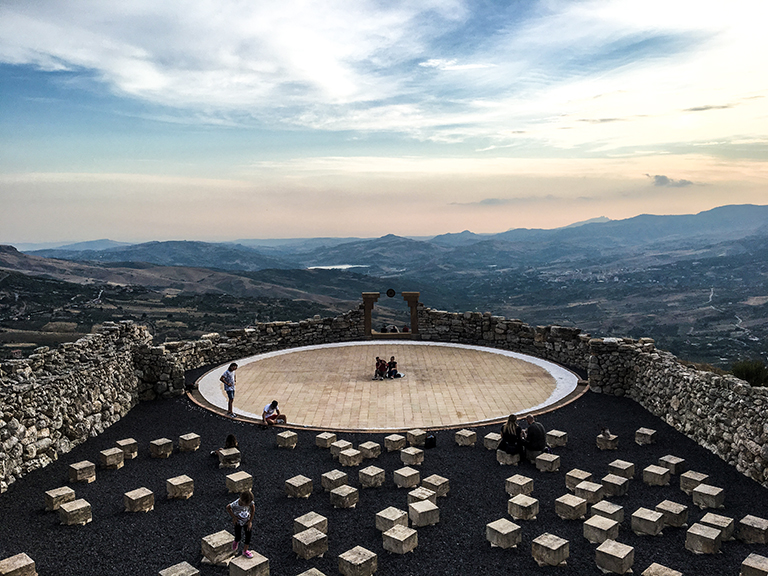 Santo Stefano Quisquisina is a medieval small town set in the amazing landscape of Sicani mountans. The embrace between nature and human work makes this town a milestone in the province of Agrigento.

In this place mystic and reality are mixed in Lorenzo Reina‘s story. He was born in 1960 and became a shepherd, according to his father’s wishes. His curiosity and his inspiration aren’t replaced for his humble life: with his sheep and his dogs, in Santo Stefano Quisquisina pastures, he continued to study philosophy, astronomy, science, art and history as a self-taught.

Animal habits intrigued him and soon he realized that, as if they were attracted to an ancestral force, at sunset, they were enchanted by the colors reflected on the natural terrace of Contrada della Rocca.
In this place, nature becomes art and it offered to the shepherd the evocative images of the Agrigento valley and of the sicilian sea.

Here, stone on stone, Lorenzo Reina made one of the most beautiful artistic and architectural work of the last centuries: Andromeda theater.
A Christ on an olive tree, a pity, a lifeless body, masks and faces are sculpted and, like an open-air museum, they decorate a steep path that leads to an imposing wall made of stones.

Within this, one hundred and eight cubes sprinkle the parterre and they reproduce the order of the stars of the Andromeda galaxy.
For its amazing beauty, the architectural project was exhibited at the XVI edition of the Venice Architecture Biennale, and this gave importance and fame to the humble shepherd.

Being able to participate in theatrical performances can be considered a real privilege, but even a

sunset in this magical atmosphere satisfies the visitor’s expectations.
Reina’s visionary work represents a sensory experience, the boundary between reality and metaphysical.